When the Chefs de Cave came to town

Last week, when two Chefs de Cave came to town, I was in my own little piece of heaven.

So what is so special about the Chefs de Cave?

In Champagne, the Chefs de Cave are the alchemists. They are the ones responsible for looking after what will become the beautiful nectar in our glass from when it was just a grape on a vine. Or maybe a grape that had already been picked, but they are completely responsible for making the drink we enjoy.

From choosing the fruit that is used in the blend, to overseeing the fermentation, checking the progress of the still wines, blending the still wines, choosing if a vintage is made, how long the bottles stay in the cellar before they are disgorged and packaged up for sale…. the Chefs de Cave are really important. Without them, we would not be able to enjoy such consistency of style in the champagnes we love.

The Chefs de Cave are very busy people – they are in high demand travelling the world in the short space of time during the year that they are not required to be at the cellars. That leaves them pretty much the period before Christmas – after the harvest has finished in October, and before the blending process starts in January/February, or sometimes at the end of the European Summer, before the harvest starts, when it is still very much a waiting game.

I was very fortunate to have the opportunity this week to meet two Chefs de Cave. One young and dynamic working for a fairly recently established cooperative, and the other working since 1983 for one of the oldest and most prestigious champagne houses, and only the 7th Chef de Cave in the entire history of the house. The contrast in styles, but common passion for the champagne they make is what is so exciting about champagne, and why champagne will always hold its status in popular culture. 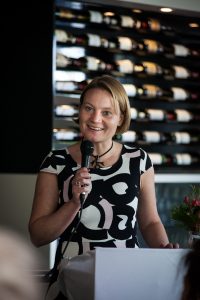 I first met Floriane in Champagne at the Jacquart chateau in Reims about two and a half years ago. Floriane is one of only about four female chefs de cave in the larger houses in Champagne. Before being appointed as the head wine maker at Jacquart, in charge of a team of four wine makers, she worked at Veuve Clicquot. She has a passion for chardonnay, and the elegance and finesse of this grape shine through in her wines. Jacquart is a cooperative of 1800 partner growers that was established about 50 years ago. The Jacquart style, like Floriane, is young and dynamic. Even the prestige cuvée, the Cuvée Alpha 2010 is made to be enjoyed now, not put away and forgotten about for another 10 years (although you could if you wanted to).

When the Jacquart team contacted me and asked if I had any free time to spend with Floriane when she visited Brisbane, I was all too happy to oblige. As it turned out, the day that Floriane had free in her schedule was the same day I had scheduled one of my Ladies Luncheons. Fortunately, although I had chosen a venue and had been working on the menu with the chef, I had not yet chosen any wines. Suddenly I had a Champagne Luncheon on my hands, and the response was amazing. We Brisbane ladies are a crowd that appreciate our champagne!

Floriane’s role with Jacquart, apart from being the head of four Chefs de Cave, is also International Communications Manager, and as the daughter of diplomats, she knows a thing or two about international communications. The company couldn’t ask for a better ambassador.

We were fortunate enough to have Floriane guide us through tasting four different cuvées – Brut Mosaique, Blanc de Blanc 2009, Cuvée Alpha 2010 and the Rosé. Each had their own style, but Floriane’s love of chardonnay shone through.

The Blanc de Blanc 2009 was a perfect pairing with the scallops and Yuzu dressing. The almost creamy minerality coming through was lovely with the yuzu and enhanced the tasting experience. The very special Cuvée Alpha 2010 held up beautifully with the duck. it is always interesting to see how a more robust champagne can pair well with the stronger flavours of duck or game. 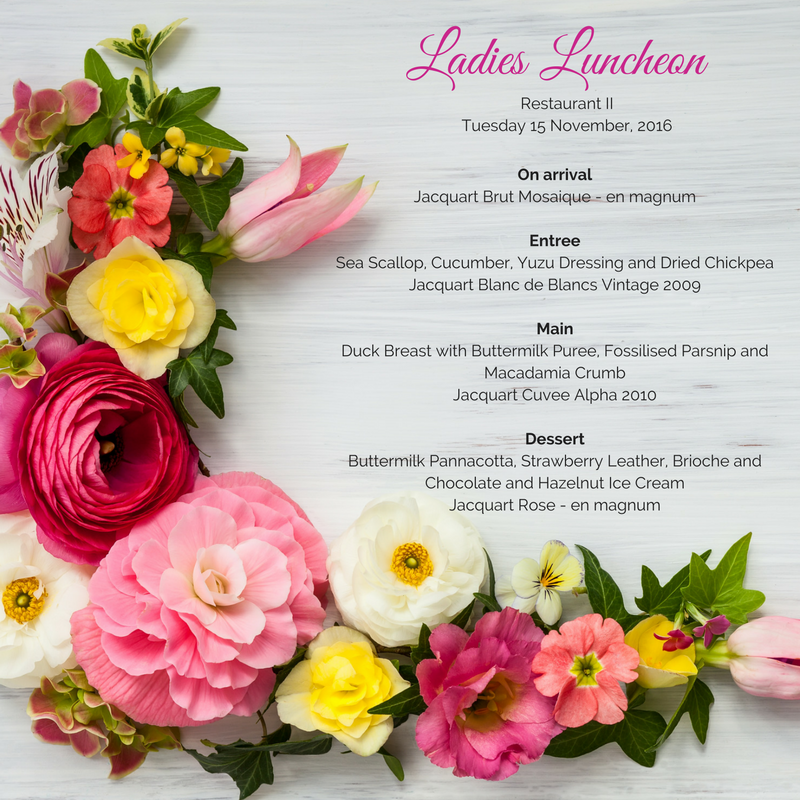 Both the Brut Mosaique and the Rosé were served en magnum – a real treat. A magnum is considered the best size bottle from which to serve champagne. A magnum is a 1.5l bottle, or twice the size of a normal bottle. Because the neck and therefore the cork surface is the same size as in a normal bottle, the same amount of oxygen that is naturally transferred into the bottle is exposed to a greater amount of liquid, so it has less effect on the liquid, keeping it more youthful. It really was a treat!

Click here to see a gallery of photos from the event. 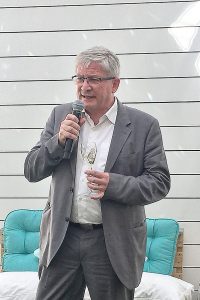 Hervé Deschamps is like Champagne royalty. Champagne born and bred, after studying in Dijon, he joined Perrier-Jouet in 1983 in charge of the ‘Cuveries’ or fermenting rooms. He replaced André Baveret in 1993 to become only the 7th Chef de Cave in the 205 year history of the house. He is the embodiment of the house style of elegance and charm.

When I was invited to meet Hervé, during his brief stay in Brisbane for a tasting of some special wines, I was quite overcome. I didn’t think I would actually get to speak to him, let alone share a laugh. Quite shy and retiring, he was very easy to talk to and his passion for the champagne he makes shines through. I spoke a little with him about the blending process, and he told me he sees it very much as a creative process.

“I go straight to the blending stage, rather like an artist, trusting in an inexplicable fusion of intuition, sensitivity and skill,” he explained.

According to Hervé, Perrier-Jouët was the first house to produce a Brut champagne, back in 1856. It was a much drier style than was fashionable at the time and was made for the taste of the British connoisseurs. To this day it remains true to the style of house.

The big tip I gained from speaking to Hervé was his excitement about the soon to be released 2008 Vintage. In his opinion, 2008 was an excellent year with less acidity than 2007, and he is rating the vintage to be somewhere between the what was seen in 2002 and the extraordinary 1982. We will have to wait until early next year in Australia to get a first taste of the Belle-Epoque 2008 – the anticipation!

Perrier-Jouët is well known for it’s beautiful Belle-Epoque bottles – the anemone design was created in 1902 by Emile Gallé, a master glassmaker of the Art Nouveau movement. We sipped our champagne throughout the afternoon in beautiful glasses with the same design, which was quite a treat. Knowing there would be empty bottles after the tasting, I took a paint pen along discretely in my handbag, wondering if I would be bold enough to ask Hervé to sign a bottle for me. As I was nervously picking my moment, one of the lovely people from Perrier-Jouët in Australia came and told me that Hervé always carried a paint pen in his pocket to sign bottles and would I like one! Yes, please! A Belle-Epoque rosé bottle, please!

I left with a precious souvenir and the knowledge that this great man is after all, a kindred spirit. 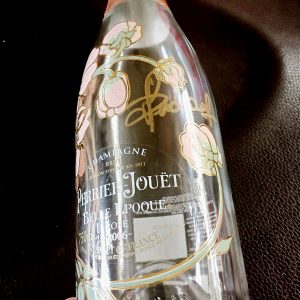 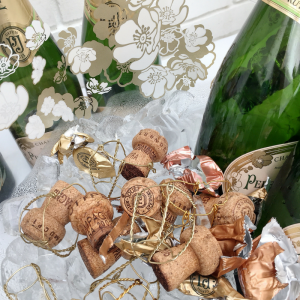 To have had the opportunity to speak with not one, but two chefs de cave in the same week was quite exciting. One of the things that I love about champagne is the absolute passion that goes into all stages of producing the wine that we so enjoy. Floriane Eznack and Hervé Deschamps represent two very different house styles, but share a common passion to produce the very best champagne to be enjoyed the world over. While the passion is there, the bubbles will always rise!