Left with some fabulous memories

It’s already a week since I returned from my ‘Fabulous Ladies Tour of Champagne’ and I am having trouble even believing that the whole trip happened now that I am back to cutting lunches and making beds!

So much happened in that last week that it whirled by in an instant.

Following our trip to Canard-Duchene, the serious part of the week started. Our visits for the next few days were planned by the Comité Interprofessionnel du Vin de Champagnes (CIVC). This is trade association that represents the interests of both the independent growers and the larger houses. They are responsible for a range of things including the promotion and protection of the Champagne brand internationally.

Not only had they planned a range of visits for us from smaller growers to larger houses, but they had also organised for us to visit their offices and get the low down on what exactly they do. There was even an educational champagne tasting organised with one of their chief sommeliers (a woman!) in their professional tasting room – we felt like we had been lead into the inner sanctum!

It was quite an education!

We were even taken to lunch at a restaurant called Bistro le 7 in Epernay that had the most extensive Champagne List I have ever seen. The first day of our ‘official’ visits was only half way over and we were completely overawed!

Following lunch we had an appointment with Jacquart champagne in Reims. Jacquart is one of the largest negotiant champagnes and has four cellar masters, the chief of them all being a lovely young woman called Floriane Eznack. Meeting Floriane was one of the highlights of the trip for us. She was so much fun and taught us so much about the actual wine making process. She even took us down to the Oenotheque (the wine library) and asked me to CHOOSE A BOTTLE. That’s right! Any bottle I wanted! I chose a 1988 vintage, not because it was a particularly great year, although it was the first of the 88, 89,90 trilogy, but because 1988 was the year I first tasted champagne, and I wanted to see what that actual vintage tasted like now! And I was also curious to see what 26 years is really like in ageing terms! 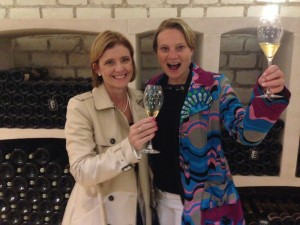 We ended up spending about 4 1/2 hours behind the doors of the fantastic House of Jacquart!

The next day was THE ultimate dream of the trip for me. Given that we only got our itinerary the day before we headed to Champagne, there was no way I could have known what was going to happen before I left Australia. The lovely people at the CIVC had organised a tour and tasting with Bollinger. But it didn’t stop there. There was lunch with the Commercial Director, a very distinguished man named Guy de Rivoire, who I had met a few weeks before in Brisbane for the launch of the 2002 Bollinger R.D. 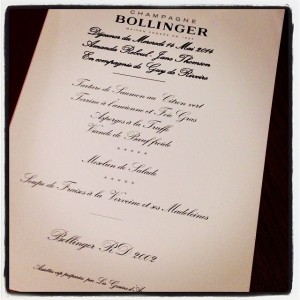 Sometimes, when you build something up that you have always dreamed of, you can be disappointed. So I went to Bollinger with no expectations, and what they showed me was pure class! From the visit through the Vieilles Vignes Françaises, to the cellars and to the tasting. We learnt and saw so much. But the ultimate surprise was lunch in a lovely room overlooking the house and vinyards, with a menu – written especially for us. They even organised a dish with some truffle in it as a nod to The Truffle Man! Everything was perfect. I’m still pinching myself!

Now, it would be reasonable to assume that anything after Bollinger would be a bit of a let down. But not in Champagne! Our next visit was to a small producer, Franck Bonville in the Grand Cru village of Avize. We met with Olivier Bonville, the current wine maker, and were struck once again by the utter joy and passion of all the champagne producers. Honestly I think there are bubbles in these people’s blood! Oliver proudly showed us around his cellars and was very excited to take us for a walk to his closed vineyards where we would drink the actual champagne that came only from those vines. Nature had other ideas though, and blew up a rather impressive storm just as we were about to head out. Apparently lightening struck the village church steeple and the lights went out while we were in the rather dark tasting room. Not to be perturbed, rather than be disappointed, Olivier decided that since we couldn’t go to his ‘Clos Belles Voyes’ – he’s just have to go and get an old vintage for us to taste! Avize is in the Cotes de Blancs, so most of the smaller houses there specialise in Blanc de Blancs (100% Chardonnay). The 1986 bottle that Olivier opened for us was magnificent – with that added air of mystique sitting in the dark! 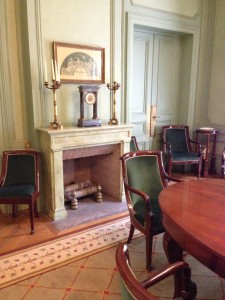 The day was not over yet, though! We still had a visit to the fabulous cellars of Moët et Chandon on the Avenue de Champagne in Epernay. Again, there were some surprises for us. We visited the cellars where the precious Dom Perignon is quietly waiting on lees until it unleashes its full potential, and had our own private sommelier for a tasting in the Imperial Room – the very noble looking room where Napoleon was received each time he visited the house! Somehow, tasting Moët Imperial and Moët Imperial Rosé in a  room once graced by the former Emperor of France just seems to make it taste so much better!

It’s a bit hard to believe that we managed to fit all this fabulous action into a few days. There was still so much more to come, but the CIVC really pulled out all stops for us over these 3 days!

One of the things I learnt when I was at the CIVC headquarters was just how serious they are about protecting the Champagne brand. Even though this blog is not a business as such, by mutual agreement, I have decided to put ‘My Champagne Daze’  to rest, and am launching my fresh cuvée ‘Tasting the Stars’. I’ve chosen this name as a nod to Dom Perignon’s supposed exclamation when he first realised the wine he had made actually had bubbles in it – ‘Come quickly, I’m tasting the stars!’. I am sure everyone knows exactly what he meant when they had their first taste of French champagne.

Please, come taste the stars with me.