I am in my office and finding it very difficult to focus on the backlog of work in front of me – piled up after being all consumed over the last few weeks with my preparation for the Vin de Champagne Awards.

What an amazing experience it has been.

I was selected as a finalist in the Vin de Champange Awards after submitting eight essays, each up to 800 words in length, on topics chosen by the judges of the awards. There were two categories – professional (for people who gain an income in the food and wine industry) and amateur (for those who have a passion about champagne). The topics in the professional category, in which I entered, ranged from the unique climate of the Champagne region, the role of reserve wines, the impact of Champagne being World Heritage listed to matching certain types of champagne to famous celebrities. As one friend commented to me after carefully proof-reading – it was more of a dissertation! It certainly involved a lot of research, time and effort. No drinking at that stage!

However, once the finalists where announced (six people with a similar passion from around Australia in each category), the serious side started! The final is made up of two parts. The first part is a blind tasting of three champagnes. This required regularly tasting various bottles of unnamed champagne and writing my notes down about them. Thankfully I had quite a few friends who were on hand to finish the bottles, but, jokes aside, it becomes really difficult. Instead of just holding a glass of bubbles in my hand and enjoying it with friends, I had to analyse every nuance in the glass, write it down before I forgot, and try to remember how to associate that particular set of characteristics with the wine once it was revealed. I ended up making myself a kind of cheat sheet table of the different grapes and what they did to the wines. Only I wasn’t allowed to take it in with me, of course, so had to try to commit it to memory.

Right up until the night I left, I was feeling pretty relaxed about the whole thing. After all, I had nothing to lose, and I had done really well even getting to the finals. But something changed in my mind when I went to bed, and suddenly all I could think of was that after months of work, I was being JUDGED the next day. I didn’t sleep well.

I had stayed over night with a good friend of mine who I hadn’t seen for a few years, and it was a really good distraction. She even suggested we go down to nearby Balmoral Beach for breakfast so I could relax. It was the perfect start to the day. I knew I had to control my nerves or I wouldn’t have a chance. I was buoyed up by the number of messages and texts of good luck from people that had kept arriving over the previous couple if days. I have never felt so supported!

Apart from a small slip up where I nearly ended up at the wrong venue for the judging, I was ready!

Then I walked into a room with this:

I resisted my natural urge to swig down the first one to calm my nerves! My heart was in my mouth, and then I remembered one friend had told me to find my happy place and take three breaths. Since I realised champagne IS my happy place, I was ready to go. I had 20 minutes to try to analyse the three wines and write down all I could to back up my choices. It felt like 5 minutes. I was able to distinguish quite a few relevant things in the wines, and was quite happy with what I had come up with, although you never really know. A non-vintage, an 04 vintage and a blanc de blanc. Or so I hoped!

My notes were collected and I was marched into the judges room. The judges were Huon Hooke, a past winner and independent wine writer for the Sydney Morning Herald, among other things; Peter Bourne, a past winner and high profile personality in the Australian wine industry; Bernadette O’Shea, a past winner and arguably Australia’s own Grande Dame of Champagne; and Elisabeth Drysdale, the director of the Champagne Bureau. Not too intimidating then!

Fortunately they were all quite relaxed and smiling and put me at my ease. They grilled me with questions on various aspects on champagne, congratulated me on my tasting notes, then said I would have to wait until the evening for the wines to be revealed! We all laughed, and it was over! I had the rest of the day to myself wandering around Sydney and getting ready for the big gala dinner. And wondering if I had done OK!

The evening finally arrived and I decided to put my glamour on. If this was the only time in my life I was going to earn my place in something like this, then I was going to make the most if it. I really didn’t mind if I was the winner or not – it’s virtually unheard of to win on the first try, but I did want to enjoy the night!

The dinner was at Hotel Centennial and the menu was created by chef Justin North. There were 15 champagnes to be enjoyed through the evening!

With the canapes we enjoyed:

These were served by waiters with round silver trays of flutes standing straight as soldiers at the door as guests arrived. 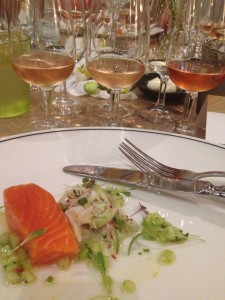 This was matched with Bollinger Rosé, Billecart Salmon Brut Rosé and Moët et Chandon Rosé 2004. Rosé pairs so well with salmon and it was a gorgeous start.

Next up was Glazier Tooth Fish, Miso, cauliflower and buckwheat 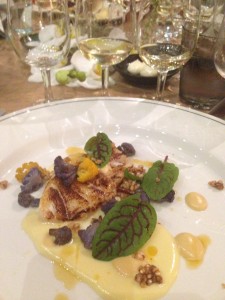 There was a short intermission after this when the winners were announced. The professional winner was a lovely lady Annette Lacey,  a professional wine lecturer at the Sydney Wine Academy. It was the third time she had been in the finals, so it was a very well deserved win. The amateur winner was a lovely young guy who was in the finals for the second time, Tom Warrell. He is in IT and just loves champagne. It was not my night to win, and I really wasn’t expecting to, but knowing that all the contestants went through the same rigorous testing, I could only be happy for them.

Fortunately they bought out the big gun champagnes with the next course, so any disappointment was quickly washed down with some absolutely stunning champagnes. 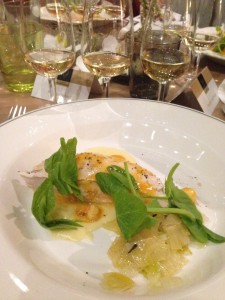 But it wasn’t finished yet! 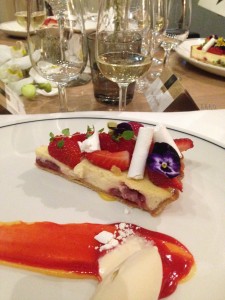 I am so fortunate to have had the opportunity to experience Champagnes night of nights in Australia. It seemed like nobody wanted it to end, and I can quite happily say that it didn’t quite end just there. A small group of finalists found themselves guests of the enigmatic Bernadette O’Shea in her room, with three more bottles to polish off. The party went on until the wee hours, but I will never forget the look of pure joy on Bernadette’s face. She was in her element, holding court, and surrounded by a young group of like minded champagne passionistas!

Oh, and I got the champagnes in the blind tasting right!