A little *CLINK!* from above 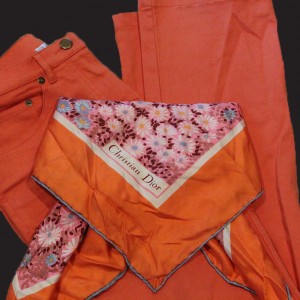 I think I had a little *CLINK!* from above on Bastille Day. I really do! I know I’ve been a little stressed lately, and some of you will now use this as proof that I have really lost the plot, but something very strange happened, and I can only think of one explanation.

This year, on the French National Day, we were invited to install a pop-up Truffle Man shop in an empty retail space along a fashionable road in Brisbane that boasts its own mini Eiffel Tower. It was the perfect place to celebrate all things French. The empty space we were allocated happened to be next to a very lovely women’s clothing boutique. While I was dashing back and forth bringing boxes of products from our car to the shop, I kept passing the clothes shop and seeing this rather lovely pair of orange jeans. They seemed to be jumping out at me saying ‘Buy me, Buy me!’. The more I saw them, the more I wanted them, which is odd, since the last time I wore orange was in approximately 1976.

At one point during the busy day, I popped into the boutique next door and asked to try the jeans on. They fitted perfectly, and the lovely owner of the boutique offered me quite a generous discount. So I naturally made my purchase, then tried to hide it from my husband for the rest of the day!

Even though they were very reasonably priced, I had a nagging thought in the back of my mind ‘What on earth are you going to wear with them?’ I decided not to worry, I would find a solution when the days warmed up and I felt more like prancing around in orange jeans.

The following day, while I was tidying up, I picked up a scarf that was inexplicably on the floor of my wardrobe. The scarf was vintage Dior, orange with pink daisies and very, very 1970s. It had been given to me by my husband’s Aunt Christiane, or Tatie Chris as she liked us to call her.

Tatie Chris was the epitome of Parisienne chic. She lived in a beautiful antique filled apartment very close to the Arc de Triomphe, and she was always impeccably groomed. She was the person who taught me the most about ‘Being French’. She always served champagne when we went to visit, and she longed nothing more than to have me live with her for a month and teach her English. This never happened, but we did become quite close, despite the distance that separated us. Her 70th birthday was one to remember – sipping champagne on a ‘Bateau Mouche’ on an evening cruise down the River Seine through Paris. Christiane had no children of her own, so she treated all her nieces and nephews as she would her own children. She was often passing on clothes or costume jewelery to me – she’d buy things on a whim, then realise that she was probably too old to wear it, so would give it to me. I will never forget though how well she could wear a bikini, well into her 70s. She would dive off her boat into the crystal clear Mediterranean sea and come up saying ‘Life is delicious!’. Somewhere in the exchange of clothes, I inherited this scarf.

Sadly, when she was about 75 and her husband was battling leukaemia, she was diagnosed with breast cancer. She hid the severity of the diagnosis from most of the family, but had confided in me, since I was a radiation therapist before I moved to Europe, and I guess she felt I would understand. She had chemotherapy and was recovering very well, but five years down the track, her arm started to swell and she had problems with her lymphatic system becoming involved.

She still didn’t let on that much was wrong, but she came and visited us in Montpellier for a week and spoilt us rotten while she was there. She started to tell me how much she loved me (not something they say very much in my husband’s family), and that she wouldn’t be around forever. It was very unusual for her to speak like that – she was always such a Pollyanna about everything. I could see her arm was swelling, so I was quite worried about her. On the day she left I asked her about her arm, and she admitted that things weren’t so good and she was going to have to start chemotherapy again on her return to Paris.

A few months later, when we were preparing to leave France to come to live in Australia, we decided to spend a few days in Paris and go and visit her. We were quite surprised at how frail she looked, but she wanted to drink champagne with us before we left. Her god-daughter, who had been staying with her, had gone out the day before and bought a special bottle for us to share – a Tsarine rosé in a very fancy bottle. She asked my husband to open the bottle and served the drinks. She was very tired, and there were renovations going on in the apartment next to her that were doing her head in.

I noticed as we laughed and drank that her champagne didn’t disappear in her glass as it normally would. She would occasionally put it up to her lips, but she really wasn’t drinking any. She just wanted to enjoy our company and have some champagne again with us. As we were leaving, she pulled me aside and said (in English, one of the rare times she spoke English to me) ‘It’s no good, it’s no good’, shaking her head. She then told me she was going to a respite clinic the following day, and she hoped she would feel better after a rest and some peace and quiet. The memory of the taste of that champagne is a little bit like tears.

Sadly she passed away about three days later, the day before we were due to leave for Australia. We were unable to go to her funeral, and the anniversary of her death is coming up on 13 August.

So I wonder….Christiane loved a good bargain, and she probably suspected that scarf was sitting unworn in my wardrobe.

I would like to think she was sending me a little *Clink!* from above when that scarf fell on the floor.