A voice over on the ABC news on Tuesday night showed footage of me sabering champagne and stated “It was not only the fashion that was cutting edge”. And it was probably all thanks to Veuve Clicquot.

In fact, if I think about it enough, a lot of what I am doing now is thanks to Veuve Clicquot. As one of the original ‘Babes in Business’ in the Champagne region, she was pretty cutting edge herself.

Barbe-Nicole Clicquot Ponsardin took over the running of her husband’s fledgling champagne business on his death in 1805 when she was only 27 years old. It was a time when woman were not expected to be involved in business. It was a time when France was still in a period of change following the Revolution, and the Napoleonic Wars were in full swing.

And yet, this young widow was particularly innovative and is partially responsible for champagne looking and tasting the way it does for us today.

She is credited with creating the first recorded vintage champagne in 1810. She also invented the riddling table – a process still used today to make the wine crystal clear. Not content to sell her wines only in France, she even overcame the continental embargo ravaging Europe as a result of the Napoleonic Wars, to ship her champagnes to St Petersburg, in Russia, where it was triumphantly received.

There is also the wonderful story of how her beauty and generosity inspired Napoleons troops to ride off to war after resting at her chateau, sabers in hand and slicing the top of their daily bottle in a bid to impress their hostess, thus starting the tradition of sabrage.

Her achievements are all the more impressive considering that the viticultural boundaries of the region of Champagne were not legally recognised until 1927.

Veuve Clicquot truly was the first Grande Dame of Champagne.

And so I found it quite enchanting to be compering a luncheon for a group of business women in celebration of Australia’s greatest horse race, the Melbourne Cup, sipping Veuve Clicquot champagne and soaking up the atmosphere.

Ever since I was a little girl I have been completely caught up in the idea of the Melbourne Cup ‘Luncheon’, where ladies came out in their finery and wore pretty little hats that did nothing to keep the sun out of their eyes. The ultimately sophisticated, to my six-year-old eyes, had a bit of netting partially over their face. My mother used to go to these functions ever year, and I remember going along with her and being to told to be on my best behaviour (I’d possibly pulled a sickie from school because I didn’t want to miss out on the fun), and I was. How could I not be with all that beauty around me. The was talk of sweeps, and fashions on the fields, and somewhere along the way there was something about horses. I vowed when I was a ‘Lady’, I would always go to ‘The Melbourne Cup Luncheon’ every year. That and get a David Jones charge card.

I eventually grew up and worked in a hospital. We would wheel the patients out around the TV to watch the great race – some of them on stretchers. We would have our little sweeps amongst the staff and it would always be a joyous few minutes. Then I moved overseas and I didn’t get to go to any Melbourne Cup Luncheons until I was about 33 and living in Tokyo, and I found out about an Australian women’s group associated with the Embassy was putting something on. I was there! I didn’t care that I didn’t know a soul, I wanted to be part of the finery! The lovely thing was, I met some other wonderful displaced people that day who were all searching for the same ‘Melbourne Cup Luncheon’ excitement that I was. It was fantastic!

Since I moved back to Australia in 2006, I have managed to frock up every year and do something with friends or colleagues. I’ve tried to make sure that it always involved champagne to some degree.

So I was pinching myself when I was asked to be involved in a wonderful luncheon this year at the Hilton Hotel, for ‘Babes in Business‘ and sponsored by Veuve Clicquot. Not only that, but they asked if I would mind terribly bringing my saber.

More than 200 years after this remarkable woman took over her husband’s company and developed it into a world renowned business, here was I, cutting the edge off one of her bottles in front of a crowded room and TV cameras. I was so proud!

I could not think of a more wonderful way to celebrate ‘The Race that Stops the Nation’ – fashion, fascinators, champagne, swords….and some horses in there somewhere! 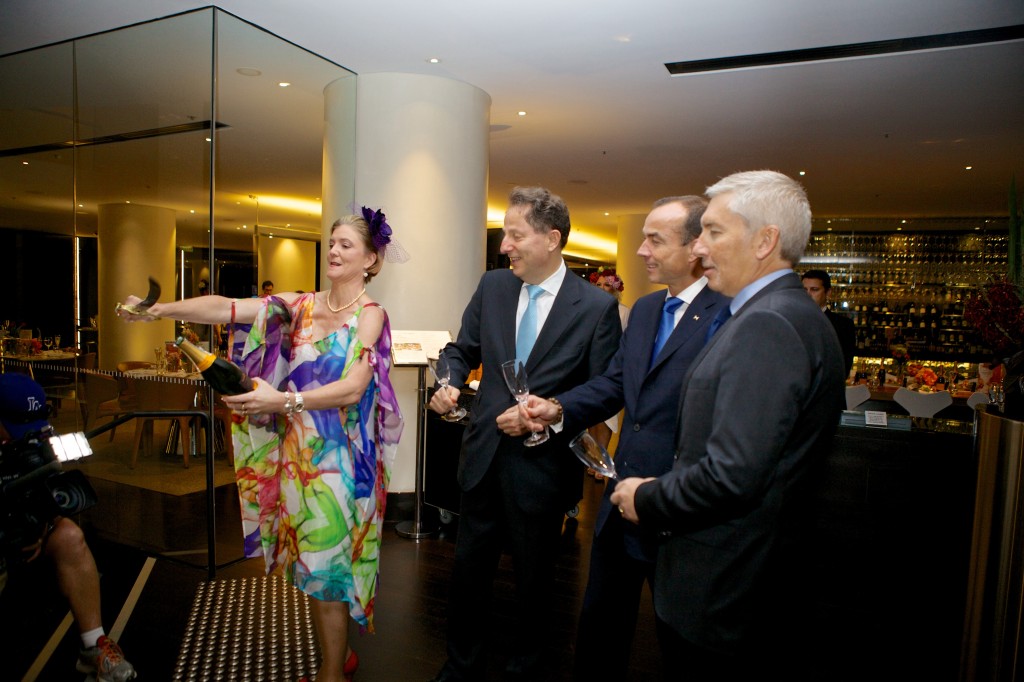