Disaster to triumph and a bottle of Mumm 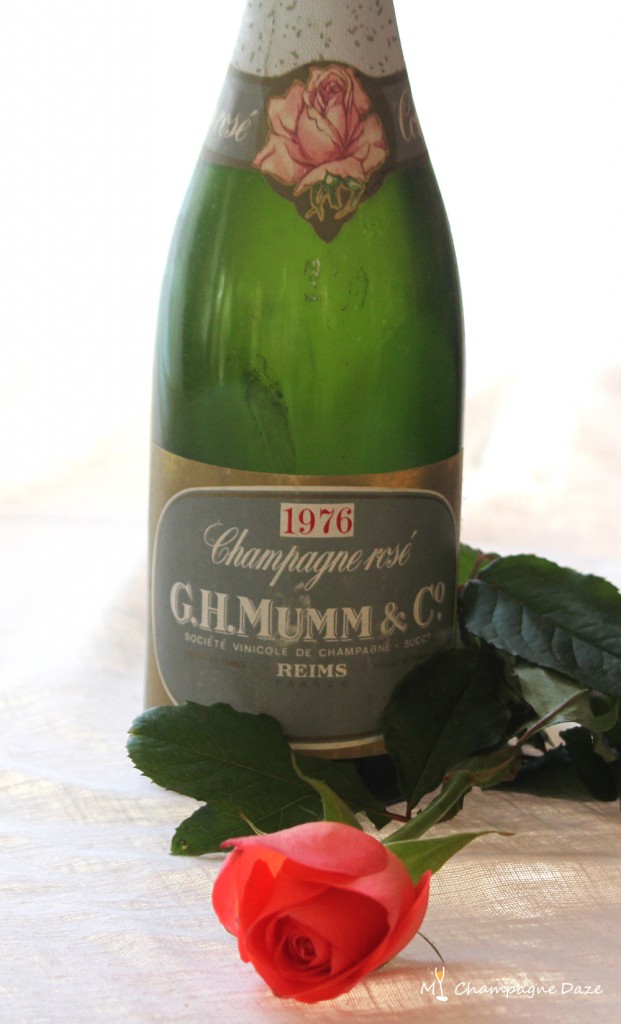 Sometimes the most highly anticipated meals don’t go quite as planned, and neither do the wines that were chosen to accompany them. This happened to me a few years ago, but I was able to turn my disaster into triumph in the most unanticipated way. And it was all a due to a rather old bottle of Mumm Rosé!

This particular bottle of Mumm had been in the cellar for quite a number of years. We were waiting for the perfect time to drink it. It had been obtained in a wine auction in Aix en Provence along with some equally old and unusually shaped bottles of Lanson.

Finding the perfect dish to have with this coveted bottle was proving difficult, but one day I was out shopping and for the first time since I had moved to Australia, I saw fresh pigeon at a butcher. Pigeon had previously been a most unappetising dish for me, but is quite widely eaten in France. I just couldn’t get my head around eating something that I associated with defacing public monuments the world over. However, once, on our first romantic getaway since becoming parents, and sans bébé, we went to a delightful regional bistro in St Remy de Provence, not too far away from Aix,  a region that I am particularly fond of.

This gorgeous little bistro had only seven tables, and really felt like we were being invited into someone’s parlour for dinner. On the menu was roast pigeon. My husband gently encouraged me to try it, because if anywhere in the world the pigeon would be delicious, it would be here. I decided to be brave and ordered, but was not feeling very confident in my choice.

The tiny bird duly arrived, golden and steaming, surrounded by a selection of perfectly presented spring vegetables. The aroma of roast bird and garlic immediately had my salivary glands working overtime, and before I could give it a second thought, I tucked in. It honestly was one of the most delicious things I have ever tasted – similar to roast chicken, but much more delicate, the flesh more tender. I had to stop myself from picking up the bones and licking them (it was a white linen table cloth, silver cutlery establishment after all).

The sommelier had suggested a Rosé from the region to accompany the meal and it was just perfect. The dessert that followed –  a chocolate nougatine concoction that simultaneously cracked and melted in my mouth was a perfect way to finish off the meal.

After we had asked for the bill, the Maitre d’ came over and quietly said ‘Chef noticed you really enjoyed your meal – would you like to come back into the kitchen to meet him?’

It was my first trip into a professional kitchen, and I looked around with wide-eyed childish wonderment at everything before me. Copper pans of all sizes, knives, whisks, enormous food processors. And some poor apprentice doing the dishes!

We had a lovely chat with the chef, a young Alain Assaud, who went on to earn a mention in the Michellin guide. It was then that I realised that great chefs really put their heart and soul into their dishes, and they do look at the plates being returned to the kitchen. The greatest compliment you can pay a chef is to return your dish empty. I told him that his dish was so good I wanted to lick the bones. He said it looked like I had!

Surprisingly, after my initial reticence, this roast pigeon had become one of my most memorable meals.

This sprang to mind on seeing the fresh pigeons at the butcher, and I immediately decided I would roast them perfectly and that it was time to bring out that bottle of Mumm. I can’t remember if there was even an occasion, other than it being a Friday night with the weekend ahead of us. I went home, pigeons carefully wrapped, with great aniticpation of the meal to come.

I put the champagne to chill and went about pouring through recipe books to find the absolute perfect way to roast a pigeon. I found out that after drying the skin then rubbing it with butter and salt, I should place them in a roasting dish and leave them alone for about 45mins.

As the aromas started to circulate in the kitchen and the juices started to sizzle in the pan, we decided to open the bottle and have a glass while the pigeon finished cooking.

This is were things started going pear shaped.

My husband reverently unwrapped the foil and started to prise the cork out of the neck of the bottle, but there was no pop. Not even a fizz. Or the sigh of a contented woman as some would say is the perfect noise to come from the opening of a bottle of champagne.

He poured us each a glass in our very best flutes, but there was not a bubble in sight. The champagne had a beautiful colour, and still tasted like a lovely aged wine, but it wasn’t the champagne experience we were waiting for.

By then the pigeon was ready, I had let it sit a bit before serving with dauphinois potatoes on my best china. Then the second disaster of the night occurred. The pigeon, although looking beautifully golden and perfectly roasted, was tough. Not just tough that you had to really work hard to slice through it. This needed a saw, and was so rubbery we couldn’t eat it. We found a bottle of red wine, piled our plates high with potato and thought about what we could have for dessert to make up for it!

The next day, a Saturday, I kept thinking of the disastrous meal and was continually reminded of it with the unfinished bottle of Mumm sitting on the bench, and the chewy uneaten pigeon looking at me every time I opened the refrigerator! I just couldn’t throw any of it away. I can not waste the flesh from an animal who has given it’s life for my sustenance, however disappointing the result was, and champagne…well, really, who throws away champagne?

Then I had an idea. I would slow cook the pigeon to tenderise it, and instead of cooking it in chicken stock, I would use the 1976 Mumm!

I heated up my cast iron pot, added some olive oil, golden shallots, finely sliced carrots, the rubbery pigeons, some sprigs of fresh thyme and the remainder of what should have been an excellent vintage rosé. I put the lid on it, turned the heat right down and let it simmer away for about 5 hours. And forgot about it. It couldn’t be any worse than what it was!

Six hours later, with the table set and the remainder of the red wine left from the previous night served in our glasses, I bought the pot to the table and removed the lid.

And that is when my disaster turned to triumph!

The results were spectacular. The meat fell from the bones, soft and tender, melting deliciously in our mouths.

We put the red wine aside and went and found a bottle of rosé champagne –  a non-vintage this time, but at least something deserving of this accidental triumph out of disaster!