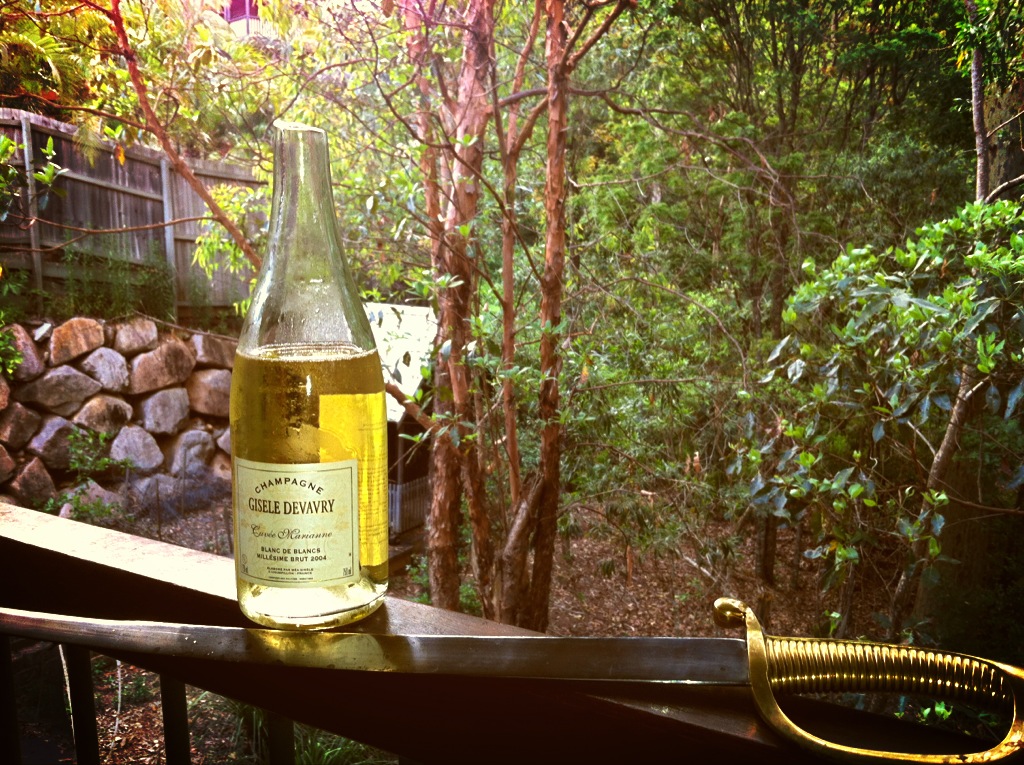 I did it, and I didn’t even feel guilty. I felt empowered! I sabered a bottle of champagne alone. No crowd, no occasion, no fanfare and no witnesses except the slightly surprised kookaburra in the tree to my left.

Sabering a bottle of champagne, like drinking one, is usually done in company. You do it with friends, to create a memory, to have a bit of fun. The other day, I just needed to do it, so I did. Three steps across the verandah, Napoleon saber in hand, sans hesitation, POP – off with your head!

You might be wondering what led to this outburst. Les Misérables. That’s what!

I had just been to see the epic movie with a lovely French girlfriend and felt absolutely and utterly drained afterwards. Maybe it was the raw emotion on the actor’s faces, close up on the silver screen. Maybe it was a reminder of what the French people lived through during the Revolution. Maybe it was guilt that we have it so easy now. Whatever it was, it rocked me.

When I got home, I felt like I needed a drink. Something strong, like Scotch. Which is odd, because I don’t drink Scotch. To my surprise, just as I was pondering this conundrum, a voice called out from the study saying that some bubbles would be nice. Yes, I thought, they would. Perfect. I went and got a bottle out of the fridge, took two of my favourite flutes, sat down on my little drinking deck, and waited. And waited. And waited. ‘Aren’t you coming?’, I call out, as the champagne steadily became less chilled. ‘In a minute’. Well in that minute, staring at that bottle of champagne, I started to become very introspective about how the French Revolution has affected my life.

As I stared at the condensation gathering on the bottle, I noticed that I have quite unwittingly chosen a bottle of Gisèle Devavry ‘Cuvée Marianne’. This was interesting, in that ‘La Marianne’ is the symbolic figure head of France  that originated during the French revolution. She symbolises the link between the common person and the Rebulic – Liberté, Egalité, Fraternité.

La Marianne as depicted in La Liberte by Delacroix

A bust of ‘La Marianne’ wearing her phrygian cap and a tricolor sash can be found in every town hall in France. Her face appears on all postage stamps. Until 2005, the face of La Marianne was modelled on well known French celebrities including Bridget Bardot, Catherine Deneuve and lastly Laetitia Casta. There was always great excitement about who would be the next ‘Marianne’, and it was a great honour to be chosen.

How appropriate, then, that the bottle I had chosen after watching a movie about the French Revolution, should also carry that name.

All this pondering made me realise that the minute I had waited for company had long since passed. The bottle wasn’t getting any colder. So, channelling Napoleon and my beloved Lily Bollinger (who both would have understood my actions, I am sure!), I went inside, picked up my saber, strode out to the bottle, and without missing a beat, sliced the top right off it.

Then I poured myself a glass and pondered some more.

When company finally arrived and I started to pour his glass, his astonished response was ‘What! You sabered alone?’