In the quiet little rue Flodoard in Epernay, stands an unassuming ‘Epicerie’, which on first glance seems to be just that – a small corner store selling fruit, vegetables and all sorts of things for the pantry.

One one of our first trips to Epernay our friends had sent us there to find some champagne for a wedding. My husband’s boss had asked him to find a good one for his daughter’s wedding.  We were told that Mme Salvatori, who owns the shop, knows everything about champagne and sells quite a collection.

As we walked into the shop, we initially thought we might have the wrong place. There were some fresh fruit and vegetables, some tins of gourmet delights, biscuits and cakes – and then our eyes were drawn to the back wall lined with bottles and bottles of champagne. Famous names. Not so famous names. Vintage ones, non-vintage ones. It was more than I could take in at once.

A tiny lady ‘of a certain age’ was standing silently in the corner of the shop. We explained why we had come and who had sent us to see her. In her quiet way, she then said if we needed a large quantity for a wedding, she had a recommendation for us. We would have to follow her out the back. If I thought she had a large amount displayed on her shelves, it was nothing compared to the stock she had out the back. She asked if we had heard of Betrand Devavry, showing us a bottle. He was her brother. Of course.

Our interest was piqued when she suggested she call her brother to see if we could drop in to his place for a ‘little’ taste. Champagne Betrand Devavry is situated in a little village called Champillon on the opposite side of the hill to Hautvillers, a town better known as the home of the Benedictine monk, Dom Perignon.

It is only about a 5 minute drive from Epernay in very picturesque countryside, so we jumped at the opportunity to visit a ‘real’ champagne house. When we arrived we were met by a very friendly Monsieur Devavry, who ushered us down to his ‘cave’. He opened a bottle of his latest vintage, a 1989, from memory and gave us a bit of a history lesson about his champagnes. He started off with 2.5 hectares of ‘vielles vignes’ (old vines) in 1946, and by 1984 was producing 100,000 bottles a year. His daughter Giselle, and later her husband Jean Loup Mea largely developed the business from 1974. The majority of their production is sold to private clients in France. 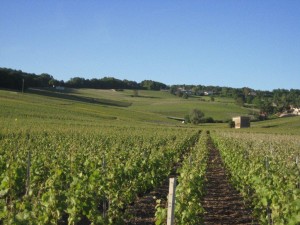 That little anecdote got us through the first bottle, which tasted fantastic to my uneducated palate, but he had more to tell us. Out came another vintage, just so we could compare. With this we discussed the subtle differences in nose and palate of the two champagnes. It was the first time I had really had an opportunity to be talked through a champagne. It was also the first of many occassion that I witnessed the generosity of spirit of the people from Champagne. We left with a bootful of champagne for a wedding!

Since that first trip in 1995, we have spent many an hour in the Mea-Devavry cellar tasting and comparing his latest blends. We have introduced it to friends all over France, Japan, and Australia, and it never disappoints.

As for Mme Salvatori, over the years she has helped us choose some very special bottles. A lovely Prince de Venoge for the birth of our first child (a daughter), a Grande Dame for the birth of our second (a son), and of course Bollinger for the youngest. Her shop is still there. She is now 85 and continues to help people find their ‘bonheur’.