When the champagne and the stars align 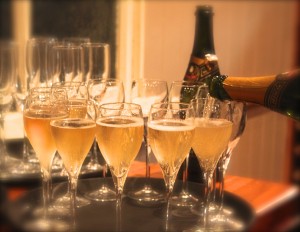 Sometimes the most mundane of days take an unexpected turn. This happened to me recently, and I am sure that it was the magic of champagne making the stars align.

When we moved to Australia, my husband decided to set up a small import business to bring some gourmet products from France to the local Brisbane market. Namely, champagne and truffles which he desperately missed. Our first year was very slow. The champagnes that we knew and loved came from small relatively unknown growers, and the local demand for something as exotic as truffles was very small. However, we kept going and the business slowly grew.

Once a year, a restaurant on the Bayside of Brisbane would put together a special menu with our food products matched with our wine, but due to time restrictions, we never really tried to organise anything else.

I often had a plan of organising a series of events around the truffle season, but wanted to do it with champagne, to have the real gourmet experience. Unfortunately, costing in champagne to a four course meal makes the meal cost prohibitive for a lot of people, and I wanted to be able to plan something that people would feel they could come to as a special treat, without breaking the budget.

This year, I decided I was going to do it. If I couldn’t have champagne with every course, I was going to at least offer a glass of Blanc de Noir (my favourite truffle/champagne pairing) on arrival. Once I had found a restaurant and chef who was on-board with my idea, we set about making a menu and choosing the other wines.

I told the restaurant I would be happy if 20 people came. They were fairly certain I would get more interest than that and said I could have 48 people comfortably in their front room. I disregarded that figure and focused on getting the 20 people I needed to make the night a success in my mind.

I did up a flyer and posted it on social media and sent it out to our mailing list.

Fairly quickly, someone responded and made a booking for six people. Soon there were ten. It was really happening! I would get my 20 people!

I started to reflect a little on my food and wine journey. I wouldn’t exactly call myself a foodie, but I LOVE cooking. I have done since I was a child. My mother, although a fantastic cook, worked in the evenings, and my Dad’s idea of a gourmet dinner was grilled fish fingers with a bit of cheese and bacon on top. Mum would mostly have dinner planned before she left for work, but on the nights she didn’t, it was pretty much fish fingers. When I was about 12 years old, I realised if I was going to vary our diet a little, I was going to have to learn to cook at least Spaghetti Bolognaise!

Around about my mid-teens, a cooking revolution (at least in my mind) began. A rather amiable French chef by the name of Gabriel Gaté started appearing on our TV screens teaching us how to cook like the French. In an easy, understandable way. I watched every show. I learnt how to make ‘Gratin Dauphinois’, which sounded so much tastier than potato bake! I learnt how to make my own vinaigrette, which really wasn’t that useful at the time since my family didn’t eat a lot of salad. And the Gateau au Chocolat – a Valentine’s Day chocolate cake surrounded by big ripe strawberries and topped with a dusting of icing sugar – surely I had reached the pinnacle of my young baking career when that one turned out perfectly!

Such was my admiration for this chef, that when I eventually met my husband, on learning he was French, I innocently asked him if he knew of ‘Gabriel Gaté’ – surely this man was famous in all of France, he was a chef after all! Sadly, I still get teased about this to this day.

The places for my truffle dinner were starting to fill up quickly once the word got around. Then on one rainy otherwise unremarkable Wednesday afternoon, there was a message on my phone. ‘Allo, Amanda. This is Gabriel Gaté. Can you call me back, I will be in town next week and would like to come to your truffle dinner if you still have a place left’. Gabriel. Gaté. In town.

Deep breath. It must be my husband’s idea of a joke. I played the message back, and it really did sound like his voice. So I called back, only to be told that the number was disconnected. Ha!Ha! Very funny. But, I listened to his message one more time and decided that it really did sound like him, and it really would be rude of me not to at least attempt to call again. So I called again, and this time, the number connected. It really was Gabriel Gaté, and he really was going to be in Brisbane, and he really did want to come to my truffle dinner.

Still, I didn’t really believe he would make it. He was in Brisbane to promote his new cook book. He was recently back in Australia after filming a series of cooking segments to be screened during the Tour de France coverage. Maybe his publicist would have something planned he was unaware of. Maybe he would just be too tired.

It was a hard secret to keep to myself, and I almost managed!

The night came – 48 people had booked – and there was a distinct buzz about the room. When most of the people had arrived, I saw a well known figure walking up the footpath, and I grabbed my friend’s arm (one of only about three people who knew about this) and said ‘He’s coming, he’s really coming!’

It was a wonderful night, and further cemented my belief that there really is a little bit of magic in champagne!

Gabriel Gaté and me